I know, I know, everyone has extra zucchini. But you know what? This is the first year it's happened to me. I don't have a garden (even now that I have a house, the yard isn't big enough for a garden), and I don't know anyone nearby who has a garden. I like to eat zucchini and summer squash plain, just boiled with salt and pepper, so when i have them, I eat them like that every day.

But now that we have our CSA, and it's squash season, we're getting a lot more than I ever used to. I'm finding some good ways to use them (boiled and tossed in some leftover restaurant thai red curry has been the best so far), including making refrigerator pickles.

I don't know why this recipe excited me so much, but it did. The brine looks like my mom's famous bread & butter pickles brine. It uses zucchini and onions, two things we had from the CSA. And I have plenty of jars, and this crazy love of putting food into jars. Did I mention it's easy?

Ingredients
For the veggies:

2lbs squash (I used yellow summer squash, zucchini, and a green striped thing that looked like a ribbed zucchini, all from CSA #8 and 9)
2 small onions, cut in half and sliced (from CSA #9)
1/4 cup pickling salt (...I used kosher, which, as you see here, is a doable substitute for pickling salt)

Slice the squashes and onions (I used my mandoline, it was immensely fun- for the onions, I sliced them in half and then used the mandoline for each half) and toss everything into a large bowl. Sprinkle the salt over and toss around to coat (layering some veggie slices with some salt would have probably been better). Cover with a layer of ice cubes and enough water to submerge everything. Leave for 1-2 hours. (This draws the water out of the veggies so that they can take up more pickling brine. Yay hypertonic solutions!)

After 1-2 hours, begin washing the veggies- to get rid of the salt. 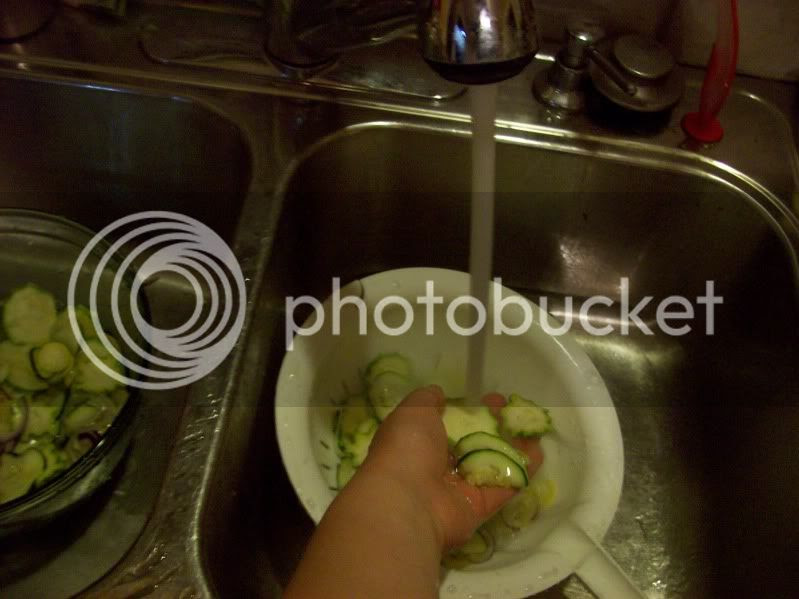 I did this by taking a small handful of veggies at a time, rinsing it under running water, and transferring to a new bowl, repeating over and over until everything was transferred. Then I repeated this 6 or 7 more times. Starting at repeat 4, I tasted one zucchini slice at the end of each transfer, to see if it still tasted salty. If yes, I washed more, until they didn't taste salty.

This is tedious, but important- you don't want your pickles to taste like a block of salt.

Combine all the brine ingredients in a medium saucepan and bring to a boil. Boil for about 5 minutes, and try to avoid getting a vinegar facial, it'll sting your eyes. Take off the burner and let cool til warm to the touch. 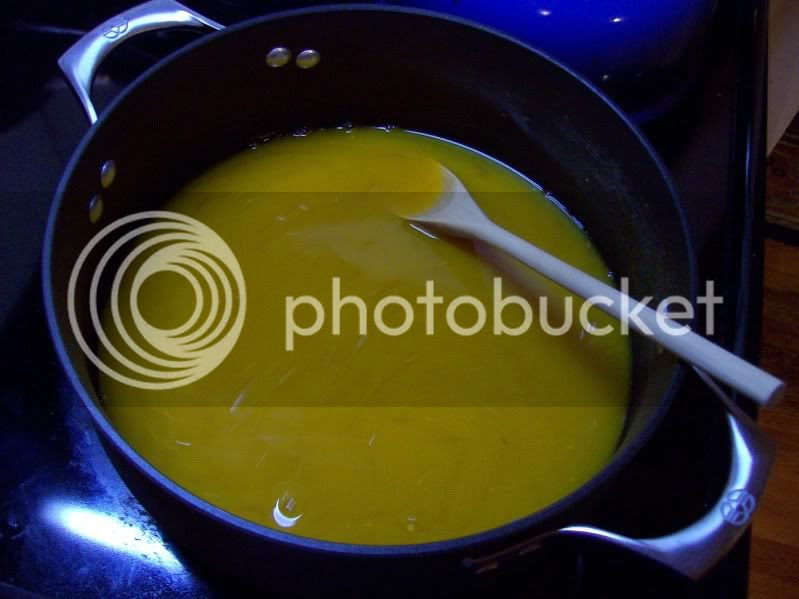 Then fill the jars.
I took 2 32oz jars (4 16oz jars will work fine), washed them in the dishwasher, and began filling them with the veggies, using a set of tongs. 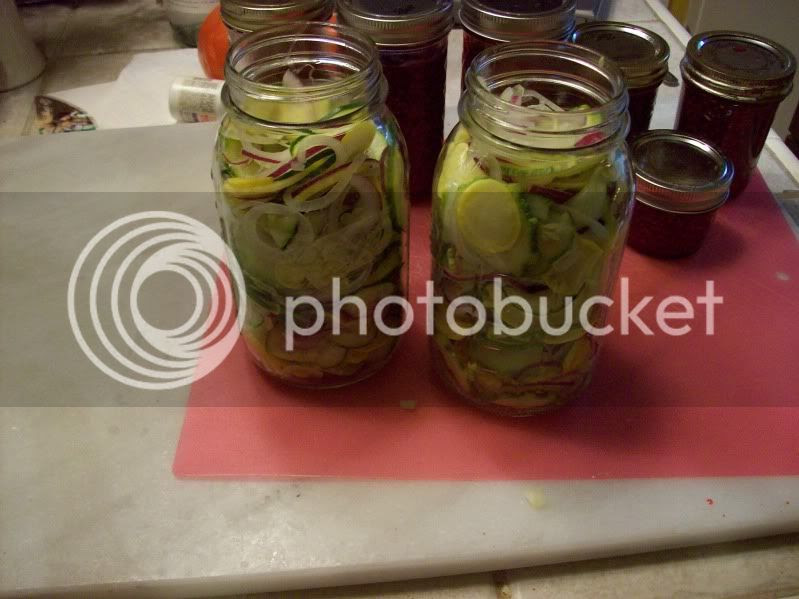 When all the veggies were in, I began to add ladle fulls of the brine into each jar, and then poked around with a butter knife to release any air caught in the veggies. 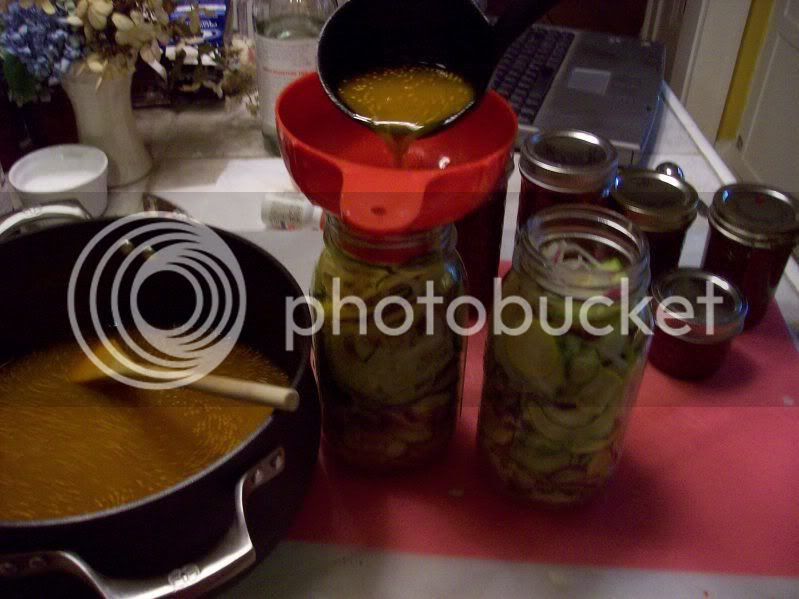 When the jars were full (I had leftover brine, I tossed, but you could certainly cut up more veggies and brine those), I wipe the tops clean of brine/veggies, put the lids and rings on, and popped them in the fridge. The original recipe suggests leaving them one day before eating, I left them for a week (kind of accidentally). They should keep for a long time in the fridge. 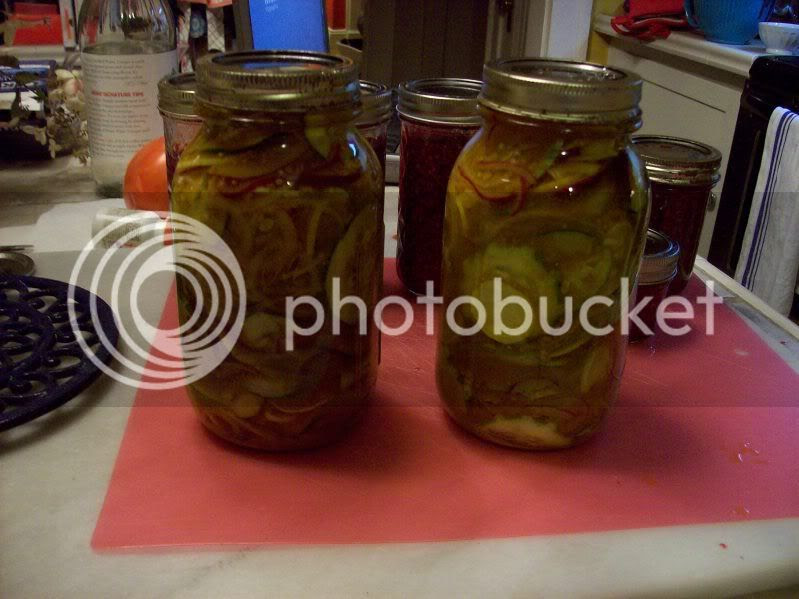 In the background of this last photo, you can see my raspberry jam peeking out from behind the zucchini pickles.
Posted by Catherine at 12:55 PM

They sound great. I may have to wait until next year to make them, however; my fridge is pretty full at present....
Tinky
http://www.ourgrandmotherskitchens.com