For the first time ever, I'm going to share our CSA bounty the morning after we got it! I have to go fast, though, I need to extract some RNA in 45 minutes.

Clint picked up our CSA share yesterday, so I came home to: 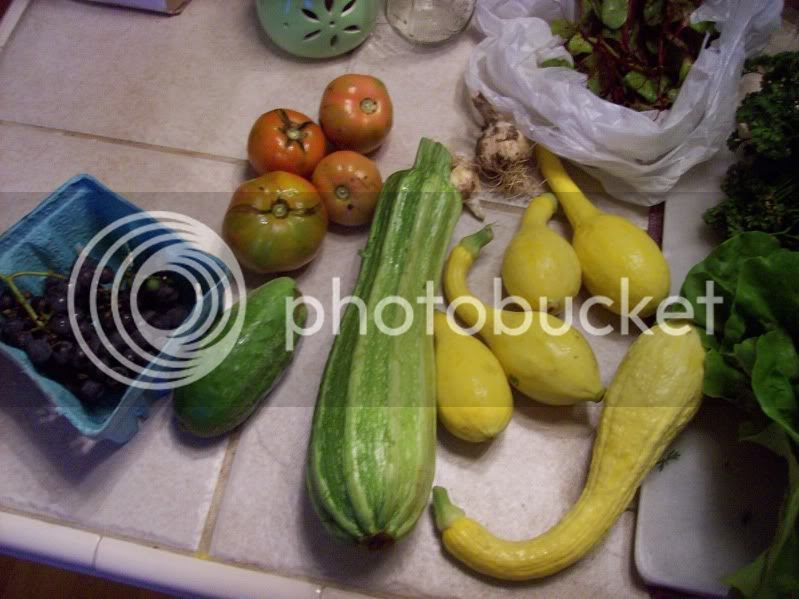 Concord grapes!! That was a surprise. A really fat cucumber, the first of our CSA's tomatoes, more squashes, 2 more garlic heads, 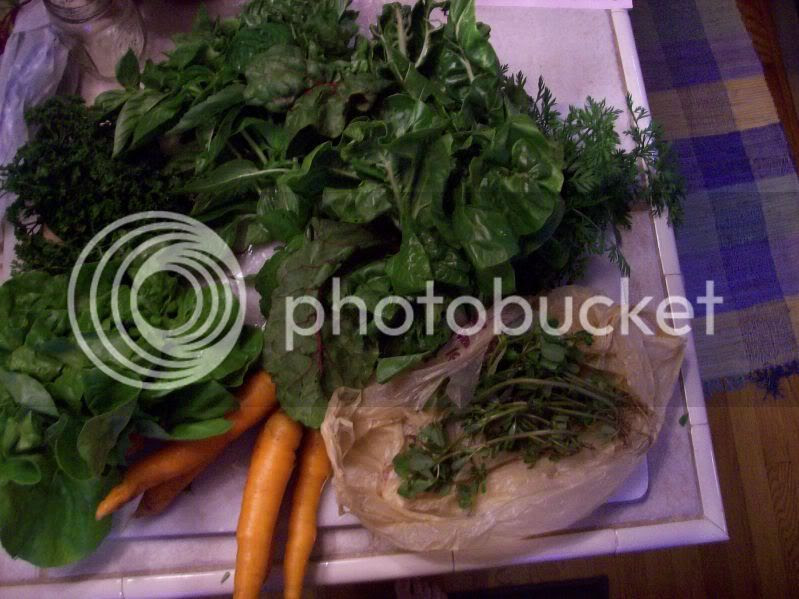 Purslane is technically a weed, but all its above-ground bits are edible. I'm going to throw it in a salad for dinner tonight, but I had a bite, and it's kind of interesting, a little sweet, a little herby. Apparently it's also good tossed in at the end of a stir fry. Fortunately, another Loving Local blogger discussed it, that was great timing! 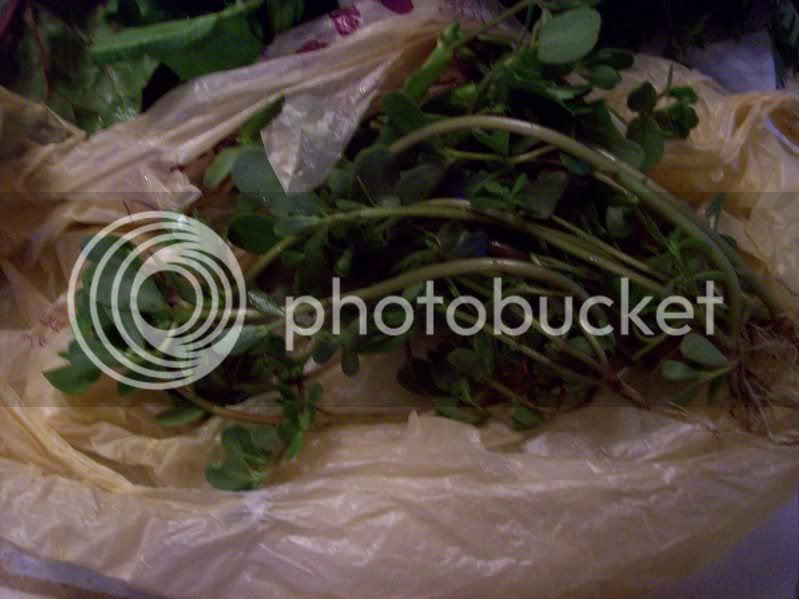 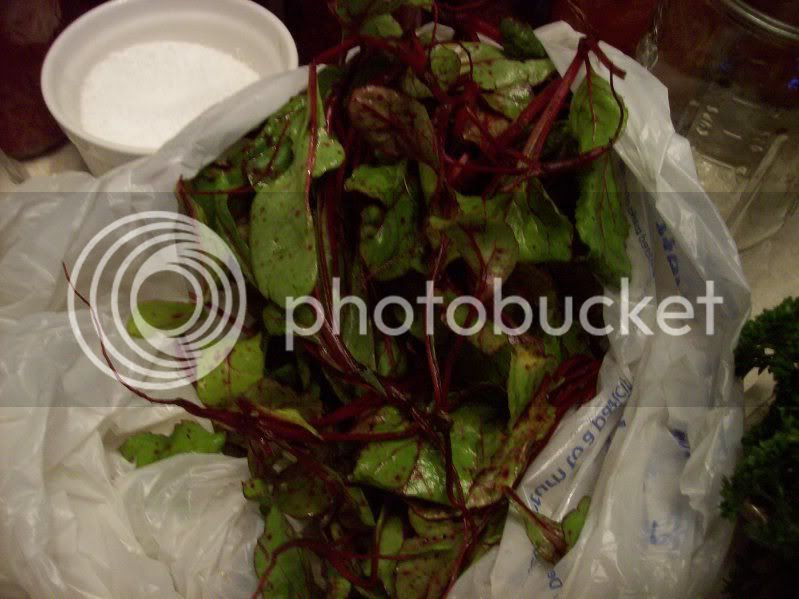 and really muddy potatoes (not pictured).

And more flowers! (sorry for the lousy picture) 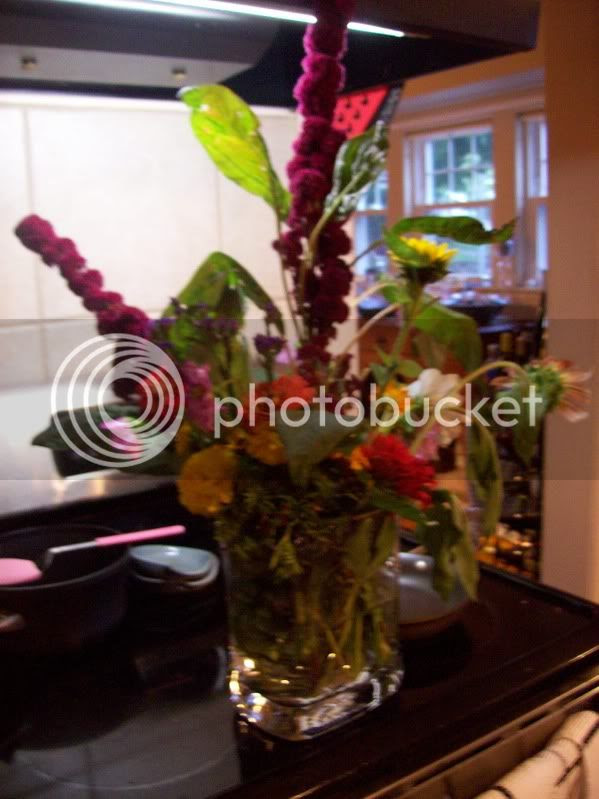 What have I done with it all? I had some squash for dinner (although honestly, it was last week's squash- there's just so much), and I used an entire head of the garlic to pickle last week's beans (I'll have to share that recipe later, after the beans pickle long enough for me to try them- the bean canning went much better than the tomato sauce). I turned more of the garlic, as well as last week's beets, into a chicken beet curry that turned out better than I expected.

I'm making gazpacho with much of the ingredients (I'm tempted to make basil gazpacho again, just to use the basil- or maybe I should make and freeze some pesto? I need to figure this out), and we'll have plenty of salads and steamed squash. I also hope to turn the squash into some baked goods, either zucchini bread (anyone have a good recipe?) or zucchini brownies.

1 dried red chile pepper (I used 1 sanaam chili, from Penzey's)
1 T olive oil
1 onion, choped
3 cloves garlic, minced
2 oz. knob of ginger, peeled and cut into slivers (I, um, had no fresh ginger.... so I soaked 2oz of crystallized ginger in warm water, rinsed several times to remove some of the sugar, and julienned. This is actually a nice substitution)
1t coriander
1t charnushka seeds (my addition, also good would be 1t garam masala. I had the charnushka on hand and had never used it)
1 lb. boneless chicken, cut into bite size pieces
7 oz. nonfat plain yogurt
2 raw beets (I used 5 little ones)
1T lemon juice
salt to taste (which... I forgot)

Soak the pepper in warm water (and the crystallized ginger, if you go that route), get that started before everything else so it has time to soak. Then chop the onion. In a large pot, heat the oil and add the onion, cook til translucent. Drain the pepper (and ginger) and chop finely (I didn't remove the seeds of the sanaam. With different peppers, you may want to- I'm not up on all the pepper varieties, though). Add the garlic, ginger and pepper to the pot, cook 2-3 minutes, then add the spices and about 1/4-1/2t salt. Cook about 30seconds and add the chicken. Cook the chicken until it's no longer pink, then add the yogurt. Lower the heat and simmer for 15 minutes. 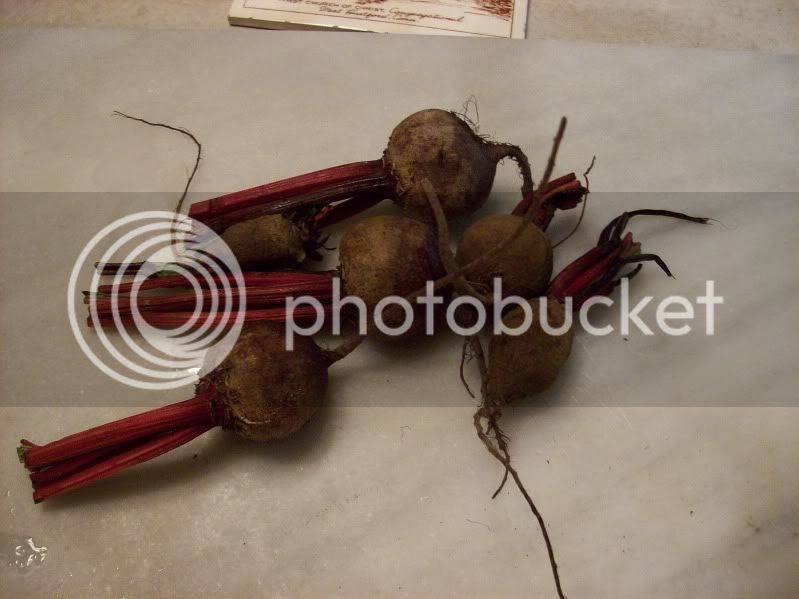 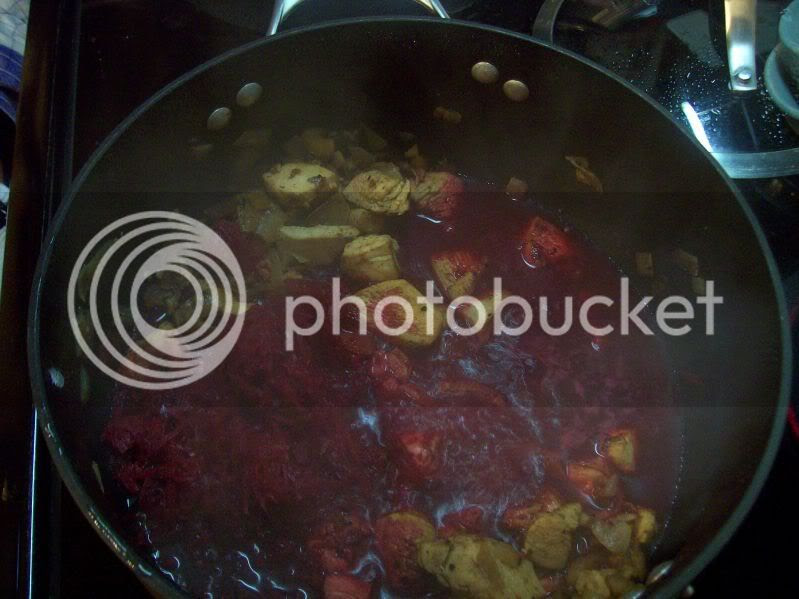 I served this over plain jasmine rice, which was really good (side note: I successfully made rice without my husband's help! Yay!). The recipe recommended serving with a dollop of yogurt on top, but I was ok without. 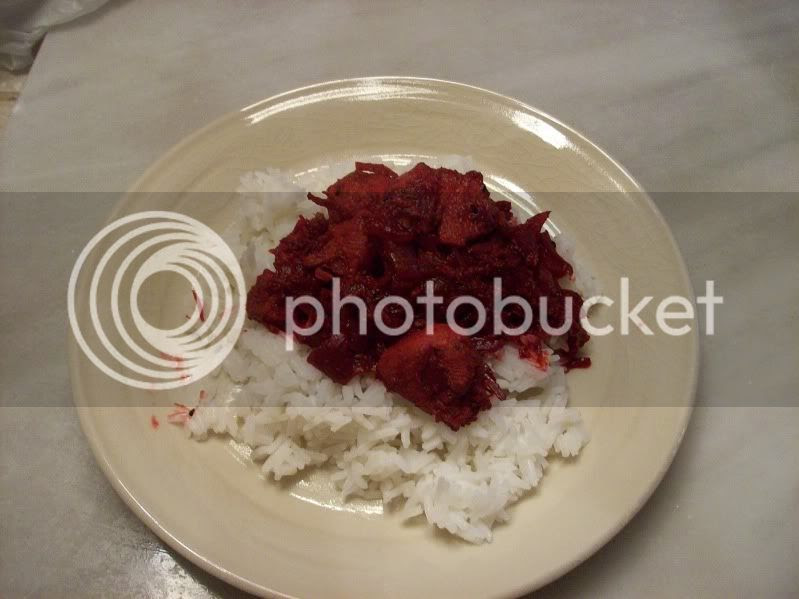 The curry: when I first saw the recipe, I thought it seemed really cool. Also, it was pink, which is just awesome. When I got to making it, though, it seemed a little boring, and I was set for a bland meal. However, just the addition of the coriander and charnushka, even adding no salt at all (oops), made this dish much more flavorful than I expected. The beets make it a little sweet, the ginger adds some good flavor, and I actually cooked the chicken very well, not under- or over-done. I think adding garam masala (instead of charnushka) will make this even more flavorful.

One thing I didn't like is that it was so lemony, which seemed out of place with the beets and spices. I'm not sure if the lemon juice serves any purpose other than flavor, but I'm going to reduce or eliminate it next time.

Since I have so, so many beets, I've found some other good recipes for them, I just don't know when I'll make them. I mentioned the stuffed beets, but I also found a caramelized beets recipe that looks easy and tasty- it's kind of like roasting beets in skillet with a little butter. Yum!

I can't wait to tell you about my other cooking adventures from last night! I mentioned the pickled beans (with CSA garlic, dill and beans), but I also made peach candy! And it worked!!
Posted by Catherine at 10:55 AM